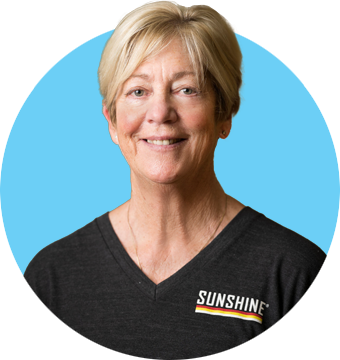 Six-time AAU All-American, and has been in the World University Games twice.

To teach the skills needed to play the game at any level and how to work with others on your team, being a team member on and off the court.

In 1969 Lou Ann Selsky began playing collegiate volleyball at El Camino College in Torrance. She was on their state championship team. She transferred to Cal State – Long Beach and was part of the national championship team in 1973. She is a six-time AAU All-American and played on the Pan American team in 1971. She has been in the World University Games twice, in 1973, as a player and in 1977 as an assistant coach. Lou Ann is a member of the Hall of Fame at El Camino College, Long Beach, and Women’s Community College Coaches Association. She graduated in 1975 with a master’s degree in Education.

She was the coach of the women’s volleyball program at Golden West College (Huntington Beach) from 1975-1982, winning the state championship in 1979. She also coached the men’s team from 1977-1983. In 1983 Lou Ann became the athletic director at Golden West, serving as president of the California Community College Athletic Directors Association in 1985. She founded the Manhattan Hot Shots Volleyball Club and was the head coach for 10 years, winning a bronze medal at the Junior Olympics. This will be her eighth year with the Sunshine Volleyball Club.

Lou Ann’s coaching philosophy is to teach the skills needed to play the game at any level and how to work with others on your team, being a team member on and off the court. Most importantly, she wants them to love the game and the journey it takes them on.

She loves working with the players, seeing them improve, and watching them fall in love with the game. She has developed many relationships playing and coaching; she wants that experience for all the players.

Lou Ann lives in Manhattan Beach and is the AD and Administrator of Gym and Field at American Martyrs School. She and her husband have four children; spending time with her family is her favorite hobby.