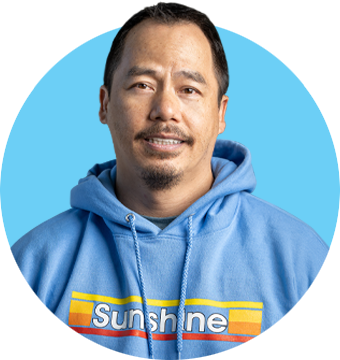 Teach skills and practice is where the learning takes place, it’s where the hard work happens.

Tuan Le didn’t play organized volleyball growing up, his high school didn’t have a boys’ team. He was on the high school wrestling team and captain for two years. He was league champion twice and placed sixth in CIF his senior year. He graduated from UCLA in 1999 with a BS in Computer Science and a BS in Applied Mathematics.

While still in high school Tuan served as the manager for the girls’ volleyball team and eventually as the assistant coach. He has been one of the Marymount High School volleyball coaches since 2006, assisting the varsity team win the California State Championship four times, including the 2021 undefeated team. Tuan also began coaching for the Sunshine Volleyball Club in 2006. Over the years there have been many high points but one of the sweetest was the 17s winning gold at the Junior Olympics in 2021.

It’s not surprising after 15+ years of working together, Tuan’s philosophy on coaching is much the same as Cari Klein’s: teach skills and practice is where the learning takes place, it’s where the hard work happens.

Tuan loves seeing the players put into practice the skills and techniques they have been taught.

While he is a self-confessed computer geek, Tuan also likes getting outside. He enjoys being at the beach, surfing, and on the slopes, snowboarding.

“I believe in the impossible..“

“It doesn’t matter what you’re trying to accomplish. It’s all a matter of discipline.”
– Wilma Rudolph