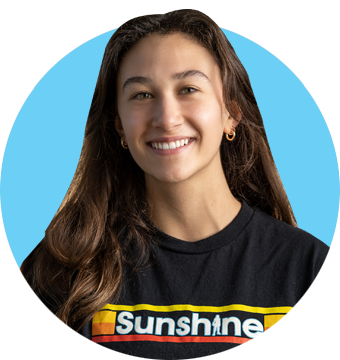 Junior Olympics! Silver and gold medal, and state championship in 2021!

Sophia Lindus has been playing with the Sunshine Volleyball Club since she was in the fifth grade. In 2021 her 17 Westside team won gold at the Junior Olympics, and she was named the division MVP. Thus far in 2022, she and the 18 Westside team have picked up a silver medal and a gold in the Chicago and Salt Lake City qualifiers. A member of the Class of 2022 at Harvard-Westlake High School, she played on the varsity squad for four years; as team captain she led the Wolverines to the state championship in 2021.

This is her first year coaching a Sunshine Volleyball Club team, but she is excited to be working with the young players.

Sophia’s coaching philosophy is based on coach-player communication and the importance of tailoring the feedback to the individual player. Some respond best to intensity while others require calm; knowing and delivering the appropriate message can ensure the players thrive and work well together.

She loves seeing the players improve each week as they grow more comfortable with the game.

Next fall Sophia will continue to play volleyball at Wesleyan University in Middletown, Connecticut.

“If you don’t love what you do…

you won’t do it with much conviction or passion.“

“You control your own wins and losses.”
– Maria Sharapova