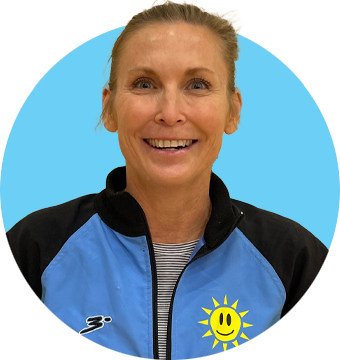 Margaret Ray played club volleyball for KJVA (now KIVA) from 1986-1992. She was the setter during her four years of varsity volleyball at Kentucky Country Day School; she earned All-State and MVP honors in 1991/1992. She played one year at the University of South Carolina before transferring to the University of Louisville where she graduated in 2003 with a double major, a BS in Biology and a BA in Communications. Margaret attended Purdue University (West Lafayette, Indiana) and obtained her MS in Biomechanics, Motor Neuroscience 2015.

She was practice player and trainer at the University of Louisville, working under Coach Don Hardin from 1993-1995 and under Coach Leonid Yelin from 1996-2000. In 2004 She began her coaching career with Louisville Catholic Schools Athletic Association (CSAA) as the Division AA head coach, coaching the 10s, 11s, 12s, and 13s teams for four seasons. From 2008 through 2011 she coached the 13s and 15s teams for the KIVA Volleyball Club.

Margaret was named the Division A 14-1 head coach for the CSAA in 2010. In 2011 her team was the JVA World Challenge Gold Champions and in 2014 they won the Crush ‘Em Classic – Gold Division. Her teams were in the CSAA City Championship Division A Final Four in 2012 and 2013. She was the head coach for the Union Volleyball Club (Louisville) from 2012 through 2016, coaching three different age groups. She coached at two high schools, Walden High School (2014-2015) and North Oldham High School (2016), both in Kentucky. She coached the JV squad at American Martyrs School for two years before taking on the varsity head coaching position for two more years. Margaret joined the Sunshine Volleyball Club in 2016, her 13 South Bay team won the AAU National Championship in 2019. This year she is the head coach of the 17 South Bay team and is the assistant coach for the 14 South Bay team.

She loves creating a culture of teamwork, discipline, and purpose. She feels fortunate for the many coaches who had an impact on her life and want to help empower younger generations of athletes in the same manner.

Keeping the sport in the family, Margaret has a daughter who played for KIVA Volleyball, Assumption High School, Transylvania University, and University of Louisville. Margaret’s next personal goal is to complete her PhD on human movement.

“Erase the word “failure” from your vocabulary.“