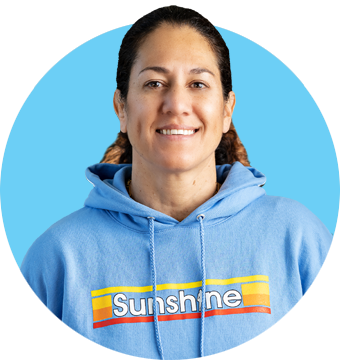 Create an environment that challenges and encourages athletes to reach their potential, on and off the court.

Makare Wilson was recruited by the University of Washington, while there she was named to the All-American team and still holds the number two spot for most blocks in the PAC-10 and PAC-12. She played three seasons with the Huskies before leaving to join the US National Volleyball Team (1998-2000). She turned professional in 2000 and played for eight different teams:

Makare has been coaching club volleyball teams for six years, one year with Mizuno Long Beach and the last five with Sunshine VC.

Her coaching philosophy is to create an environment that challenges and encourages athletes to reach their potential, on and off the court.

She loves seeing the players grow and feel more confident in themselves and their volleyball skills.

While now a resident of Redondo Beach, Makare was born in the Fiji Islands. She is the oldest of eight, five sisters and two brothers, and six out of the eight received volleyball scholarships to college. She speaks three languages aside from English, French, Italian, and Fijian. Makare has a daughter, Wakaya, who is a freshman at Tiffin University and is playing volleyball there.