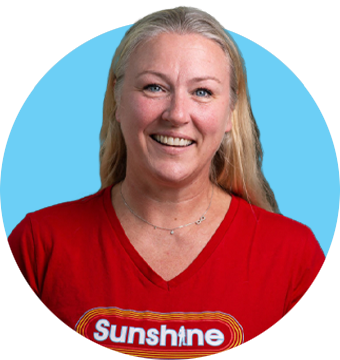 To guide the athletes as they develop into the best versions of themselves on and off the court.

Heather Bown is originally from Orange County, CA. She was recruited by UCSB and played MB for two years, being named to the All-Big West 1st Team and ranked ninth nationally in hitting percentage. After transferring to the University of Hawaii Heather was named WAC Player of the Year in 1998 and 1999. She was also an AVCA 1st Team All-American for both years. In 1999, she was the NCAA Division I Blocking Leader. Heather played on three US Olympic teams, Sydney 2000, Athens 2004, and Beijing 2008; the team won the Silver in Beijing. She earned her MBA from Keller School of Management while continuing to play internationally.

In 2015 after retiring from playing, Heather began coaching high school and club volleyball in Florida. She coached the varsity team at Cardinal Gibbons High School for two years. Since returning to California in 2017, she has coached the 16 Westside to a JO Bronze Open Division.

Heather’s coaching philosophy is to guide the athletes as they develop into the best versions of themselves on and off the court.

She loves seeing an athlete or a team have that “aha moment” of insight.
When away from the courts Heather is an Acquisition Project Manager. She has two fur babies, Kira and Ben, they brighten her life every day. She loves decorating for all the holidays, especially Christmas.

“Somebody gives you an opportunity, say yes to it.“

“So what if you fail? you won’t know if you fail or succeed unless you try.“