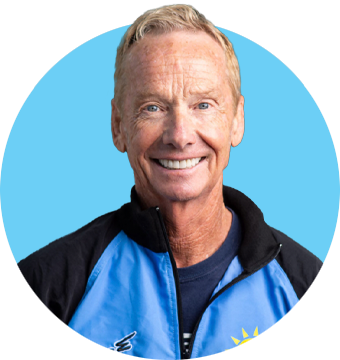 To develop their skills from a rudimentary basis and to create a positive environment in order to establish a lifelong interest in volleyball.

Danny Burke grew up playing many sports but didn’t start playing volleyball until he was in high school. He learned the game at various open gym nights. His love of coaching began while he was still in high school, coaching basketball, and baseball. This was the catalyst for his teaching and coaching career. He graduated from Cal State Northridge with a BS in Kinesiology and attained a California teaching credential in Adapted Physical Education. Danny has taught physical education for over 30 years.

He coached and was the organizer for many sports including volleyball, basketball, football, and baseball. His specialization in coaching volleyball began in 1988 at Pali Volleyball Club. He became the club co-director in 1993. Danny also coached the girls high school teams at Pacific Palisades Charter (1993-1994) and Crossroads High School (1995-1999). In 1994 the Pacific Palisades team won the City Championship. He has also assisted at the Al Scates and Marv Dunphy volleyball camps. While this is only his third year with the Sunshine Volleyball Club, he has 15 years of coaching club volleyball experience.

Danny’s coaching philosophy, especially when working with younger players, is to develop their skills from a rudimentary basis and to create a positive environment in order to establish a lifelong interest in volleyball.

He wants to develop in each player a passion for the sport as well as teaching them to have a strong work ethic.

“We can push ourselves further.
We always have more to give.“

“All the physical comes from the mental.”
– Clara Hughes